Manufactured by Pilot and coming from our list of best cheap fountain pens, the Plumix isn’t just an unusual and inexpensive fountain pen, but one of the best fountain pens available for less than a $50 price point. Its unique design distinguishes it from more standard pens, and its italic nib makes it ideal for quality writing that is both fun and different. This combination of creative design and nib make it an appealing choice among the less than $10 group of fountain pens. 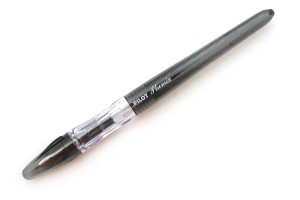 The Pilot Plumix boasts a number of features that make it an unusual and endearing pen. For instance, it boasts a short cap that is just large enough to fit over the nib. In addition, the pen’s body is clear, allowing the consumer to view the ink level. The design is completed by a barrel that comes in a variety of colors, including black, blue, and purple. The one downside to the design of the pen is the existence of a thicker area on the barrel, which can create some hand fatigue in the user. Overall, however, the result of the Plumix’ design is a pen that is easy to identify and sure to draw attention whenever it is used.

In addition to its design, the Pilot Plumix stands out because of its nib. This pen boasts a medium italic nib, rather than the more traditional regular nib. The italic nib offers consumers more than just a square appearance. Instead, the nib’s square lines mean that it can be used to draw either wide lines or fine lines, depending upon which edges of the nib are used on the paper. In addition, the italic nib is designed to offer a smoother ink flow. The nib does tend to be a dryer writer than other types of nibs. In addition, the square shape of the nib makes it more vulnerable to scratchiness and catching on the paper. It performs better on more expensive paper.

The Pilot Plumix is ideal for consumers who want to create appealing lettering without spending a lot of money. The pen’s italic nib makes it easier to create smooth, sharp lines and beautiful writing, while the pen itself comes in at less than $10. The result is a pen that should meet the needs of anyone looking to improve the appearance of their writing without breaking the bank.

Fountain pens receive the hype. Most underestimate that some of the best ballpoint pens destroy the... more»

The Best Fountain Pen Reviews of 2015

The Basics of How to Write with a Fountain Pen

Fountain pens offer a fun, exciting, and elegant way to write. The smooth flow of the ink, the... more»

The basic look and function of the Lamy Safari fountain pen masks its far from basic performance... more»

A Beginner’s Guide To Choosing The Right Fountain Pen

The perfect fountain pen will make the act of writing a true pleasure. The feel of it gliding... more»

Built with practicality and ease of use in mind, the Pilot Vanishing Point retractable fountain pen... more»

One of the reasons you can feel comfortable spending a fairly significant amount of money on a... more»

The heart and soul of a quality fountain pen is its nib, the tip where the ink flows onto the page.... more»

The Namiki Falcon fountain pen (currently on our list of the the Top Fountain Pens Reviewed) comes... more»

For anyone looking to enjoy the fountain pen experience without paying the hundreds of dollars that... more»

Compactness and portability define the Lamy Pico ballpoint pen. This small nugget of a pen tucks a... more»

The Waterman Phileas fountain pen is a solid basic fountain pen. Ideal for newcomers to the world... more»

The Lamy Joy fountain pen is the cousin of the Lamy Safari. Boasting the durable build and same... more»

The Lamy Dialog 3 is a distinctive, high-end pen. A twist pen, it dispenses with a cap in favor of... more»

The Lamy CP1 fountain pen is a plain pen with far from plain performance. Its simple design,... more»

The Faber-Castell Basic is a reliable workhorse of a fountain pen that comes at a reasonable price.... more»

The Lamy Studio is both elegant and sleek. Characterized by a sharp design, unique details, and... more»

This site participates in the Amazon Affiliate program. Many links on our site are external affiliate links to Amazon for which we earn a commission on purchases subsequently made. (see our privacy notice for more details)
BEST PENS © 2014