Fountain pens offer a fun, exciting, and elegant way to write. The smooth flow of the ink, the comforting weight of the pen in the hand, and the sophisticated design make even the most mundane writing a luxurious experience. However, creating an easy flow of ink and neat letters with this writing instrument requires a bit more work than when using a regular ballpoint pen. Effectively writing with a fountain pen requires proper positioning of the hand, proper positioning of the pen, proper writing technique, and practice. Once mastered, however, writing with a fountain pen can be a unique and rewarding experience. 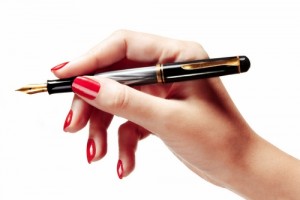 Holding a fountain pen correctly requires a different type of hold from that which most people learned growing up, and is different from the correct way to hold a pencil or ballpoint pen. Most people hold a pen or pencil between the thumb and index and middle fingers. This three-fingered grip, however, makes it more difficult to control the movement of the pen across the page. It also tends to make the writer use their fingers instead of their arms to write, which makes it more difficult to form the letters properly.

Instead of this three-fingered grip, the best way to hold the fountain pen is between just the thumb and the index finger. The rest of the hand rests on the paper, with the fingers curled into the palm. The hand should not apply very much pressure on the page. This grip will make it easier to control how the pen moves across the page and will more easily angle the pen for maximum ink flow.

The position of the pen is just as important as the position of the hand when writing with a fountain pen. Unlike ballpoint pens, which can be used by holding the pen directly on top of the paper and pressing down, the fountain pen requires a bit of finesse and an angle to get the ink flowing just right. Holding the pen upright and pressing down will only result in a scratched paper and possible damage to the nib of the pen.

Instead, fountain pens are best held at a 45-degree angle to the paper. Holding the paper up at this angle can help the writer achieve the correct position for the fountain pen, but it is possible to use the fountain pen correctly even on flat surfaces. The easiest way to achieve the correct angle for the pen is to make sure that the barrel rests along the last knuckle on the index finger, in the fatty portion of the hand connecting the index finger and thumb. In addition, the writer should make sure to apply only light pressure to the paper, rather than bearing down on the pen. Too much pressure can damage the nib of the pen and create hand fatigue. 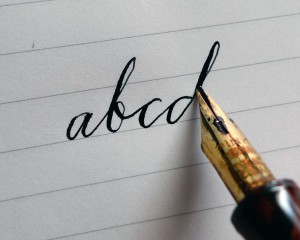 Once the writer is holding the pen correctly and has the pen positioned correctly on the paper, they need to employ the proper writing technique in order to get the best writing out of their fountain pen. This technique may require the writer to relearn how to use their arms and hands to create the letters on the page. For instance, many writers are what are called finger writers. Finger writers use their fingers to form the letters and words on the page. This technique, while it will work with a fountain pen, leads to unevenly shaped letters, less reliable ink flow, and greater hand fatigue, as the muscles in the fingers wear out quickly from the effort of forming the words.

Instead, the writer should use the shoulder and forearm to power the movement of the pen over the paper. The fingers should acts a support and guide for the pen without putting pressure on the pen. The result of this technique is much less hand fatigue, as the larger muscles are able to sustain the work of writing for longer periods of time. In addition, the pen should remain steady as it writes, instead of being twisted around the hand as is often done with pencils and ballpoint pens.

Because learning how to write with a fountain pen requires relearning certain things, such as the position of the pen and the part of the arm used to control the movement, the best way to master the use of the fountain pen is to practice. At least 15 minutes a day of working with the fountain pen can give the writer the type of control they need to write fluidly within a very short amount of time.

Learning how to use the shoulder and forearm to power the pen movements may be the most difficult transition to make. The best way to practice this technique is to practice the arm movements first without a pen, in the air. After the movements of the muscles has been mastered, the writer can begin practicing the technique with pen and paper. Over time, using the correct muscles to write will become second-nature, and the writer will be able to create beautiful lettering without much effort.

Writing with a fountain pen is a new experience, unlike writing with a pencil or a ballpoint pen. It requires learning different hand and pen positions and a different writing technique. These techniques, however, will result in a pen that produces an even, pleasing flow of ink, and will allow the writer to create beautiful lettering. Obtaining this pleasant writing experience, and enjoying all the benefits of the fountain pen, requires nothing more than a little bit of practice. As a result, writers should feel free to embrace the fountain pen and the enjoyable, elegant writing experience that it provides.

Fountain pens receive the hype. Most underestimate that some of the best ballpoint pens destroy the... more»

The Best Fountain Pen Reviews of 2015

The Basics of How to Write with a Fountain Pen

Fountain pens offer a fun, exciting, and elegant way to write. The smooth flow of the ink, the... more»

The basic look and function of the Lamy Safari fountain pen masks its far from basic performance... more»

A Beginner’s Guide To Choosing The Right Fountain Pen

The perfect fountain pen will make the act of writing a true pleasure. The feel of it gliding... more»

Built with practicality and ease of use in mind, the Pilot Vanishing Point retractable fountain pen... more»

One of the reasons you can feel comfortable spending a fairly significant amount of money on a... more»

The heart and soul of a quality fountain pen is its nib, the tip where the ink flows onto the page.... more»

The Namiki Falcon fountain pen (currently on our list of the the Top Fountain Pens Reviewed) comes... more»

For anyone looking to enjoy the fountain pen experience without paying the hundreds of dollars that... more»

Compactness and portability define the Lamy Pico ballpoint pen. This small nugget of a pen tucks a... more»

The Waterman Phileas fountain pen is a solid basic fountain pen. Ideal for newcomers to the world... more»

The Lamy Joy fountain pen is the cousin of the Lamy Safari. Boasting the durable build and same... more»

The Lamy Dialog 3 is a distinctive, high-end pen. A twist pen, it dispenses with a cap in favor of... more»

The Lamy CP1 fountain pen is a plain pen with far from plain performance. Its simple design,... more»

The Faber-Castell Basic is a reliable workhorse of a fountain pen that comes at a reasonable price.... more»

The Lamy Studio is both elegant and sleek. Characterized by a sharp design, unique details, and... more»

This site participates in the Amazon Affiliate program. Many links on our site are external affiliate links to Amazon for which we earn a commission on purchases subsequently made. (see our privacy notice for more details)
BEST PENS © 2014